It looked just like the French countryside. Greenery and blush pink peonies crowned chairs and doorways. Stone ledges and charming blue-doored garden cottages set along on the sprawling property. The magnificent stone mansion overlooked the lawn filled with guests mingling on their way to wooden chairs facing wide-open spaces. Gold and cream stars cascaded from tree branches over cream-colored vintage couches and sky blue chairs. Sheer white fabric dressed long wooden tables with wooden chairs and lights strung above. It was a festive garden party nestled in the heart of central Texas, and there was a beautiful wedding that was about to transpire.

Paige and Chris are both from Shreveport, Louisiana, but never crossed paths until 2008 when they both lived in Austin. They met through a mutual friend at a quirky dive bar where beer and good conversation sparked the beginning of a friendship. They went on a first date several months later, and Chris introduced Paige to Austin. They fell in love over dinners, music festivals, and long sunny days at Lake Austin. In 2012, Chris was ready to ask Paige to marry him. They went to the hill country outside Austin where vineyards overtook the landscape. They were in Fredericksburg for a wine tasting. With a bottle of vino, they sat down under a cluster of trees, and the big moment happened. Chris told Paige how much he loved her and asked for her hand in marriage. Much to her surprise and excitement, Chris had been ring shopping weeks before. He knew Paige’s personality and picked a diamond and setting he knew she’d love. “I had no idea!” Paige remembers. Chris also arranged for their friends and family to surprise them. With an idyllic backdrop as their setting, everyone celebrated the newly engaged couple with anticipation of a beautiful Austin wedding ahead of them.

Paige and Chris looked at lots of venues. They wanted the wedding outdoors with lots of daylight for the ceremony and part of the reception after sunset. They also desired a spot where they could have the ceremony, dinner, and dancing. About 25 minutes from downtown Austin they found their perfect place. “We knew we wanted to incorporate the outdoors and have it feel festive, but still wanted everything to be very relaxed and comfortable. We looked at several venues around Austin, but once we saw Le San Michele, it was hard to picture our wedding anywhere else,” Paige says.

Finding the perfect wedding gown wasn’t quite as easy. Paige wasn’t sure what kind of dress she wanted, so she went on a shopping trip with her mom, friends, and sister. After trying on a countless number of gowns, the group slept on it for the night. The next day, they went back for Paige to try on her favorite, a gorgeous gown by Monique Lhuillier. “As soon as I said, ‘this was the dress,’ they all yelled. Turns out, it was their favorite all along as well,” Paige says. The bridal store also made beautiful detachable sleeves from part of the veil.

The couple knew they were running a risk with the weather for their March 2014 nuptials, but Mother Nature was looking out for them the day of the wedding. The temperature was in the mid-70s, and Le San Michele was as breathtaking as ever with its prickly pear cactus plants, agave, and spire trees. Spring pastels from the palest pink to a more brilliant rouge pink popped against a background of greenery. At 5 o’clock, about 175 friends and family filled the rows of chairs as the central Texas wind made the greenery sway at the garden party. Handkerchief programs were on each chair, and Texas wildflowers could be seen blooming all around the ceremony site. The groomsmen wore grey suits, and the bridesmaids wore knee-length gowns in their choice of style.

Escorted down the aisle by her father, Paige was stunning in her tulle Monique Lhuillier gown with full skirt and delicate appliqués in the palest pink. Their ceremony was relatively short with traditional vows and poems read by their friends. The same pastor that performed Paige’s sister’s ceremony also married them. “There was even more land beyond the stone wall, behind Pastor Craig, so for the first part of the ceremony it felt like it was just us standing in the middle of the field. It was so calming and intimate,” Blair says. After the minister pronounced them husband and wife, Chris kissed his bride, and they led the way to the reception with beaming smiles across their faces.

The reception was a secluded soiree with farm tables, delicious food, and soul music. The couple shared their first dance to “Lovin’ in my Baby’s Eyes” by Taj Majal. The blues music filled the open field while loved ones looked on at the joyous bride and groom. Dinner was served family style with a decadent menu with southern favorites from grilled Texas shrimp and grits to homemade brown butter cornbread. The dessert table was a huge hit with cheesecakes, brownies, lemon bars, and Whoopie pies. While they were eating, guests put on their pastel paper crowns – a fun English tradition the couple incorporated. The night was perfect for mingling and celebrating Paige and Chris. “It was the right size to where we got to talk to everybody and enjoy the people there,” Chris says.

At the end of the night, each guest took home a CD that looked like a vinyl record filled with some of the great soul music from the reception. To conclude their evening in the countryside, Paige and Chris knew they had to go out with flair. They rented a flamboyant teal 1950s station wagon for their getaway car; “very Buddy Holly,” Chris says. As everyone wished them well, the couple ran through a flurry of confetti to get in the vintage car. Even though it was dark, the serene setting was still gorgeous, and the air was just chilly enough that you wanted to hold your loved one close. Something special happened that night. Two people started a new chapter as one in a setting so peaceful it seemed right out of a storybook, a countryside romance for a couple meant for a beautiful life together. 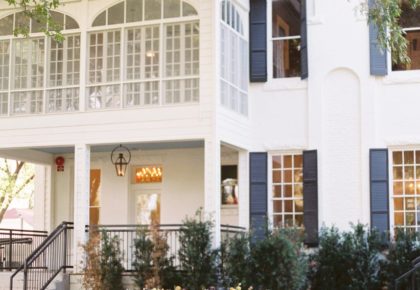