Mother nature always seems to strike whenever you have plans. In Kelsey and Josh’s case, it was a blizzard that hit Dallas in February 2014. Josh had surprised her with a trip to Austin, but with the ice and snow, it took them 8 hours to get there! The couple had met in third grade. They eventually attended the same college and started dating in 2013. Josh describes Kelsey as light-hearted, creative, intelligent, and the love of his life. “She is fun loving and goofy, loves me for who I am, is an amazing cook and a strong woman,” Josh says. “Josh was the love of my life before I even knew it. He shows compassion toward everyone, is very smart, and appreciates my goofy sense of humor – most of the time!” Kelsey says. The Austin trip was a bit of a stressful one with the weather, and Kelsey found it kind of odd that they were still trying to make the trip happen with the inclement weather. When they finally arrived, they settled into their hotel and enjoyed a tasty brunch the next morning and set out for some vintage shopping. Josh convinced Kelsey to go checkout Laguna Gloria for a possible wedding venue (or so she thought!). They had been discussing marriage plans and designing her ring. She was excited to see the venue Josh had found. They were walking down the trails around the museum when it started to lightly rain. “Kelsey was talking to me the whole way down the path, talking about air plants and how they didn’t need soil. I heard basically none of it since I was so nervous,” Josh remembers. They walked together to a gazebo, and Kelsey was caught off guard when Josh got down on one knee. “For a split second I thought he was just playing a joke because he likes to razz me every once in a while, but then I saw the box, and he asked that very important question. “I had this whole speech prepared, but of course I immediately forgot it when I got to my knee and the rest is history,” Josh says. Josh had hired a photographer to capture the sweet moment. Kelsey said “yes” and dropped to her knees in tears. “It was perfect in every way – rain and all,” she remembers.

When the couple jumped into wedding planning, the city in which the stylish soiree would be held was decision number one. They ultimately decided to return to Austin for a short-distance destination wedding, and of course, it was where they got engaged. One of the most important vendors to book first was the wedding photographer. Kelsey and Josh enjoy dabbling in some amateur photography and love photos shot in low light. They found just what they were looking for with Two Pair Photography. Finding their venue was also at the top of the priority list. They wanted to be able to have the ceremony and reception at the same venue. When they checked out Brazos Hall in the heart of downtown Austin’s hotel district, they knew right away it was perfect. They loved the industrial look downstairs with long-leaf pine floors and brick walls, and the second floor was covered, so weather wouldn’t affect their big day. The couple envisioned a “desert urban, Southern California” look. They would achieve this with a combination of bright flowers popping against wood tables and modern geometric decorations.

At half past four in the afternoon on April 30, 2016, three hundred friends and family members gathered to witness the marriage of Kelsey and Josh Barton. The ceremony was held upstairs in the covered, open-air space filled with cactus plants and a large rectangle arch of greenery and creamy flowers under which the bride and groom exchanged vows. One of Kelsey’s favorite parts of the day was before the ceremony when she prayed with her family and bridesmaids. “There were no cameras or videos. [It was] just me with my loved ones giving glory to God and asking for His guidance in every part of our marriage,” Kelsey remembers. The bridesmaids were elegant in floor-length robin’s egg blue gowns from J.Crew, and the men looked dapper in dark gray suits pants and vests. Josh was eagerly anticipating his bride to make her grand entrance. Kelsey shared a special moment with her dad after the wedding party had taken their places. “Then we came around the corner and saw all the faces of our friends and family. I thought, ‘wow, that’s a lot of eyeballs on me!’ But then I saw Josh, and everything else sort of melted away,” Kelsey remembers. The couple exchanged traditional vows in a sentimental ceremony. Kelsey’s lifelong pastor married them, and a close friend read scripture. Once the minister pronounced them husband and wife, Josh kissed his bride, and the celebration began.

The other half of the upstairs floor had an open roof for cocktail hour. The wedding party took pictures in the open-air setting. Josh and Kelsey looked very urban chic with his dark suit and her elegant sheath gown by Rivini from The Bridal Salon at Neiman Marcus. Eventually everyone made their way downstairs to enjoy a buffet dinner and night of dancing. The groom says it’s hard to pick just one favorite thing about the reception. “The band was awesome and received tons of compliments. The toasts were amazing and so heartfelt. They all meant a lot to me,” Josh says. “We are so very thankful for the heartfelt words our sweet matron of honor, best man, and father shared that day,” Kelsey says.

The dance floor was filled the whole night. To kick things off, Kelsey and Josh shared their first dance as husband and wife to “Let’s Stay Together” by Al Green. Josh danced with his mother to “Ain’t No Mountain High Enough” by Marvin Gaye, and Kelsey danced with her father to “Nothing Can Change This Love” by Sam Cooke. The tables looked very southern California with ivory plates, gold details, cactus plants, and tropical flower arrangements cascading from above. The four-tiered wedding cake was incredible. It was smoothly iced in white with a gilded look and translucent agate detail. “I really tried to stop every once in a while and take it all in,” Kelsey says. The couple loved their decision to hold their wedding in Austin. After hours of dancing to the Night Owls Band, the newlyweds were off to relax for a few days before their honeymoon in Hawaii. For the big exit, everyone lined up with sparklers to say goodbye. Kelsey and Josh waved and said goodnight. Then, they climbed into the vintage car waiting to whisk them away in the city where they’d dreamed of starting a new chapter together on such a beautiful night. 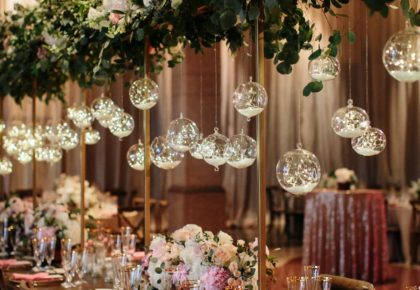 A Rustic Elegance Wedding With a Magical Day to Night Transition 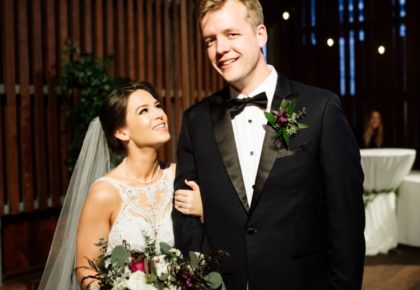 An Modern Austin Soiree to Swoon Over 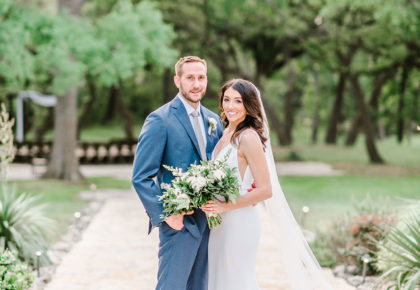 You'll Fall In Love With This Industrial Organic Wedding