A stunning floral square archway framed the couple in the open air of Brazos Hall. Pinks, purples, creams and greenery surrounded the beautiful couple on a night to remember. The men were in tuxedos with black bow ties, and the women wore gorgeous burgundy floor-length Bohemian style gowns. Tree branch like chandeliers covered in flowers and clear globes cascaded over the long tables waiting for cheerful company. The newlyweds’ initials were pin spotted on the wall. A horse-drawn carriage could be found outside. It was elegant Austin.

Blair Watson and David Knippa met in sixth grade in Austin. The conversations by their lockers turned romantic by the end of high school when the couple started dating their senior year. “She takes charge of a room. People fall for Blair as soon as they meet her. She has an infectious personality and is really fun to be around,” David says. They stayed friends during college and got back together in 2010. The couple says people expected them to be together for years, but marriage talk didn’t begin until they were older.

Over a beautiful dinner in May 2013, David’s elaborate proposal plan transpired. The couple lived in Houston at the time, and on a Tuesday evening, everything was seemingly normal to Blair. Little did she know, David had arranged for her family to be in Houston that night when he popped the question. “I love how David included my family in the proposal,” Blair says. “He also made it a surprise that way because he knew I’d never expect for them to be there in the middle of the week.” In the company of their loved ones, David pulled out a sparkling engagement ring and asked for Blair’s hand in marriage. After an excited “yes,” everyone celebrated the couple and started thinking about the stylish soiree to come.

In their search for the perfect wedding venue, Blair and David wanted to include their personalities and find someplace with a fun vibe. “I wanted it to truly be a celebration of David and I. I wanted to make it easy on our friends and family, and have a great band, food and drinks!” Blair remembers. The couple hired wedding planner Becky Navarro of Pearl Events to coordinate the details of the big day. “I learned that there is so much more that goes into wedding planning than I ever imagined,” Blair says. One of the bride’s favorite activities was shopping for her wedding gown. She looked at four different places, and finally found the perfect Anna Maier lace gown. “My favorite part about my wedding dress was that I felt comfortable in it. When I put it on I just knew, ‘this is the one!’” Blair says.

After months of combing through Pinterest, registering for wedding gifts, choosing flowers, and getting their RSVP’s in the mail, the couple was ready to tie the knot. The rehearsal dinner at Waller Ballroom was full of story swapping and memorable toasts. Loved ones cheered the soon to be wed couple over delicious barbecue and cocktails. Blair spent the night with her sisters in adjoining rooms, so it was the perfect way to kick of her wedding day celebrating with them. The ladies snacked, sipped mimosas, and listened to music while getting their hair and makeup done in the room. “They helped distract me from the natural anxiety I was feeling,” Blair says.

Two hundred fifty friends and family filled the wooden chairs facing the stunning floral arch at half past six. The weather was perfect, and the feeling of excitement was in the air as the processional began. Once David, the bridesmaids and the groomsmen made their way to the front, it was time for Blair’s big entrance. Escorted down the aisle by her father, she wore a strapless white lace gown with a sweetheart neckline and A-line skirt by Anna Maier. She completed her look with her brunette hair swept back into a long tulle veil with lace edges, a garnet bracelet, diamond and ruby earrings, and Kate Spade shoes. The couple said traditional vows in the open-air ceremony. Full flowers in peaches, pinks, burgundy and cream overlooked the bride and groom as they exchanged rings. After the minister pronounced them husband and wife, David kissed his beautiful bride, and they led the way to a lively night of dinner and dancing.

The band MatchMaker had much of the crowd on the dance floor as others made their way through the buffet-style food stations. “The whole atmosphere was great. From the beginning to end, it seemed like everyone was having a blast and letting go. I think the band had a lot to do with that,” David remembers. The energy spread from the stage to the photo booth, where guests snickered wearing wigs and holding cutouts of animals. The dance floor lit up with glow sticks before the end of the night finally arrived. Everyone swayed to Ed Sheeran’s “Thinking Out Loud” before cheering David and Blair as they walked out to a horse drawn carriage. Lights on the carriage glowed in the dark, and white flowers and greenery cascaded from above. “This might sound cliché, but at the end of the night, I felt like the luckiest girl in the world. I had married the love of my life, and was surrounded by family and friends who were all there to support us!” Blair remembers, “I was on cloud nine.” Blair playfully sat on the lap of her husband, and the two kissed. In the fairytale-like setting of the carriage pulled by a beautiful white horse, it was clear these two childhood friends were meant for their own fairytale ending. 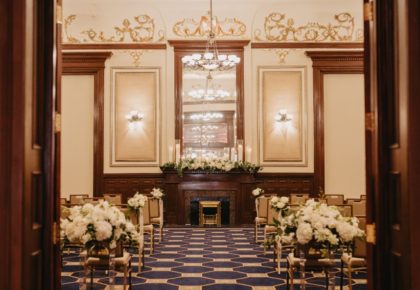 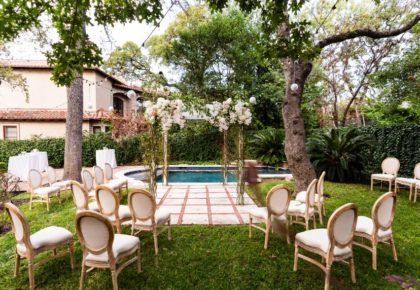