For Kristen and Kellen’s summer garden Austin wedding, the magic was in the details! Thankfully the couple had the amazing team at Westcott Weddings making sure each and every detail was absolutely perfect for their big day. Kristen looked gorgeous in her Kate McDonald gown from Unbridaled, and the invitations from Paper Place set the tone for the couple’s sweet celebration. The reception was dressed to the nines with florals from Clementine Botanical Art and rentals from Loot and Marquee. Of course, Austin wedding photographer Julie Wilhite captured it all, and we are so thrilled to share the gorgeousness! Cheers to Kristen and Kellen!

Old Saint Nick typically delivers toys to girls and boys but in December 2013 he brought Kristen and Kellen the greatest gift – each other. While living in New York, Kristen and Kellen were introduced by mutual friends but it didn’t turn into anything more until six months later at the annual Santa Con bar crawl. Kellen initially turned down the invitation to join Kristen and their group of friends, but changed his mind at the last minute. That night, sparks began to fly and they shared their first kiss — no mistletoe required. The couple spent the next few years bonding over their love of movies, cooking and eventually adopted a dog named Holtby. Kristen says she was impressed that Kellen volunteered at a local dog rescue and that brought them closer together. Since Kellen is Canadian, he also tried to impress Kristen with his mad ice skating skills. Although Kristen thought it was cute that he tried to show off, she joked that it wasn’t a must-have skill for a possible life partner.

Once Kristen decided that she wanted to spend her life with Kellen, she sent a not-so-subtle hint by putting Kellen on a jeweler’s mailing list. Kellen had already determined that the feelings were mutual and had his family stone put into the perfect ring setting. Kristen says she knew the ring had been ordered, but was wondering when he would pop the question. “The most surprising thing about our engagement was that it was on a Thursday, because I was convinced that he would propose on the weekend,” Kristen said. “I was looking at all of our weekend plans and every day was booked up. I thought, ‘When is he planning on proposing? We have all these plans and he surprised me by proposing in July on a Thursday night.” Kellen used the skyline of Manhattan as his backdrop and proposed on the roof of their apartment. Holtby, the couple’s beloved dog, was also there to celebrate.

Since Kristen and Kellen had talked about getting engaged before the actual proposal, they already had a venue booked for June 10, 2017. They took the first opening available at Barr Mansion – the perfect place for their classic summer garden wedding. The couple liked that the venue made all of their food organic and many ingredients were grown on property. “We wanted to get married in a place where there were a lot of life and plants around so that’s what we liked about Barr Mansion,” Kellen said. “They had the big tree that we could get married under and there were a lot of things growing on the premise so we were happy about that.”

The couple focused on good photography and great food for their big day along with overall logistics to create an amazing experience for their guests. “It was more important to us that people walk away from the wedding saying ‘I had such a great time’ than ‘That was the most beautiful wedding I’ve ever seen’” Kellen said. “We really just wanted to put on a great party where everybody would have a lot of fun.” Part of the overall experience included making sure that everybody was comfortable in the Texas heat. Drinks and fans were provided before the ceremony to make sure guests weren’t too hot. Extra bartenders were hired so nobody waited too long for drinks and food was served family style to avoid long lines. Kristen and Kellen agree that one of their favorite parts of the wedding was the champagne tower set up for the reception. They thought it was a unique feature and liked that it was easily accessible from the dance floor.

Since Holtby was an important part of their initial bonding as a couple, Kristen and Kellen agreed that he should have the royal treatment on their wedding day. The couple hired a personal dog attendant from The Pet Gal who made sure Holtby was well fed and walked him around to mingle during the cocktail hour before taking him home. The couple liked that the vendor was able to take care of the dog so that the responsibility didn’t have to fall on a family member or friend. Kristen said that Holtby practically stole the show when he walked down the aisle and stood with the groomsmen during the ceremony.

The couple decided to wait until the walk down the aisle to see each other for the first time, but Kristen did catch a glimpse of Kellen while relaxing in the bridal suite. She saw him arriving at the venue with his family and immediately got emotional. “I started tearing up right when I saw him because he looked so handsome,” Kristen said. “I had to step away and my bridesmaids were like ‘Stop, you’re going to ruin your makeup.’ So that was my first reaction when I saw Kellen – tearing up, just full of emotion and excitement and nerves and ready for the day to begin.” Kristen and Kellen each chose their closest two friends to serve as bridesmaids and groomsmen and let them choose their own dresses and suits. For her own gown, Kristen choose an A-line dress that she described as simple and comfortable. When Kellen saw Kristen walking down the aisle he immediately thought his bride looked beautiful but also got a little nervous about being the center of attention in a large crowd of people. “I think I actually calmed down a little bit after I saw Kristen since I was standing up there by myself at first,” he said. “So when she came down the aisle, I saw my friend and I was like ‘Oh yeah I don’t have to do this alone, I get to do this with my best friend’ so that made me feel better about it.”

Kristen and Kellen decided to cut out several things that are considered “traditional” for weddings, because they didn’t feel the need to include them. Instead of long speeches, a bouquet toss and a grand exit, the couple focused on having a fun and relaxed evening.

One of their favorite memories from the reception was singing a popular 80’s song “Don’t you want me?” by The Human League. “My friends and I really like this YouTube video where they auto tune the lyrics, so the only lyrics in the song are “You were working as a waitress in a cocktail bar,” Kellen said. “So like sixty people were singing those lyrics to the entire tune of the song.” The newlyweds capped off the night at Rustic Tap downtown.

Kristen said her best advice to other brides would be to enjoy the process and have a great wedding planner to make it an easy planning experience. She couldn’t say enough good things about their planners at Westcott Weddings and loved that they did most of the vendor research for her. Kellen advises grooms to plan enough activities for the day of the wedding to avoid sitting around and being nervous all day. After the wedding festivities were over, the newlyweds enjoyed a honeymoon in New Orleans before returning to Austin to start their life as a family of three – husband, wife and Holtby. 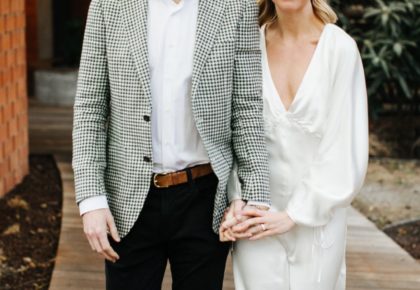 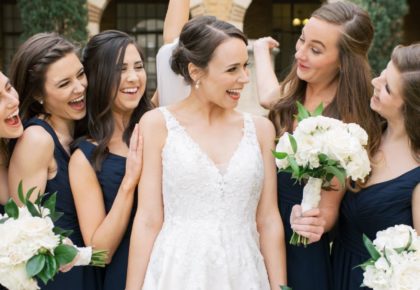 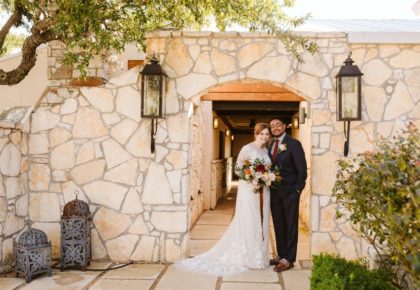