SWEET BEGINNINGS: Monique and Luke met in acting school at Ithaca College. Luke was a year older than her but they were a part of the same theatre house. One night, Monique invited anyone who was interested to drive with her to the New York State Fair the next morning. It ended up being three of her girlfriends and Luke, so they piled into her car and drove to Syracuse. Awkward at first, it ended up being one of the best days of Monique’s life! For the next three years, Monique and Luke went back to the fair to celebrate their anniversary. This year marks seven years since that day, and they couple is planning another trip to Syracuse to ride the Ferris wheel!

PERFECT PROPOSAL: It was sunset on the Hudson River by their NYC apartment. It had snowed the night before, so everything was blanketed in white. Monique and Luke are both actors: her show had the night off, but he had a show that evening and wanted to take a walk by the river beforehand. Monique thought this was crazy because there was a foot of snow outside, but bundled up and agreed. Over the years, the couple has accumulated a long list of pet names and inside jokes, most of which they no longer remember the origins. Luke started asking Monique if she would be his “Pearl,” his “Strawberry,” his “Myrtle,” and so forth, going through the list of their silly inside jokes. Monique was laughing and completely caught off-guard when he asked if she would also be his wife. She couldn’t believe it! Luke then got down on one knee and asked Monique to marry him.

THE SETTING: The Four Seasons Hotel Austin was the perfect venue for Monique and Luke. They wanted an outdoor feel but with the perks of central air. Their ceremony was held on the beautiful back lawn of the Four Seasons and the reception in the foyers. Monique loved how Brock + Co. Events was able to bring the outside feel inside. The foyer was drenched in natural light, draped with greenery and given a sprawling gold dance floor.

GET HER LOOK: The bride’s dress was a custom Oscar de la Renta gown inspired by his Spring 2015 collection, which featured lace printing on an organza A-line bodice with a fleur-embroidered tulle overlay and sequin embroidery. She wore her older sister’s veil, a cathedral-length Vera Wang. Monique finished her look with pearl and diamond studs from Tiffany & Co. that she got as a birthday gift from Luke. 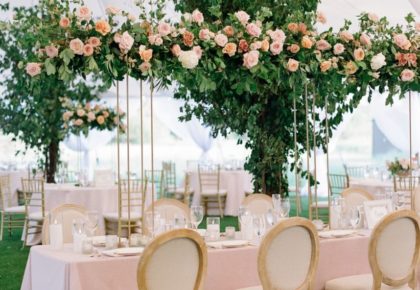 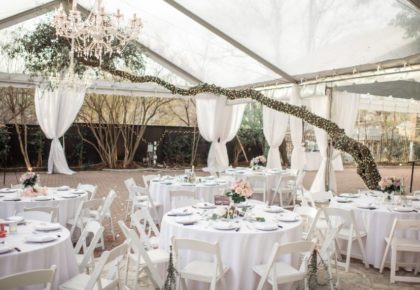 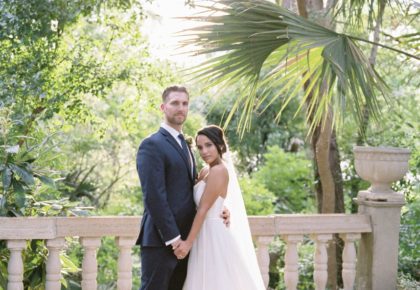